The giant trevally is the largest member of the genus Caranx, and the fifth-largest member of the family Carangidae (exceeded by the yellowtail amberjack, greater amberjack, leerfish and rainbow runner), with a recorded maximum length of 170 cm and a weight of 80 kg. Specimens this size are very rare, with the species only occasionally seen at lengths greater than 80 cm. It appears the Hawaiian Islands contain the largest fish, where individuals over 100 lbs are common. Elsewhere in the world, only three individuals over 100 lbs have been reported to the IGFA.

The giant trevally is similar in shape to a number of other large jacks and trevallies, having an ovate, moderately compressed body with the dorsal profile more convex than the ventral profile, particularly anteriorly. The dorsal fin is in two parts, the first consisting of eight spines and the second of one spine followed by 18 to 21 soft rays. The anal finconsists of two anteriorly detached spines followed by one spine and 15 to 17 soft rays. The pelvic fins contain 1 spine and 19 to 21 soft rays. The caudal fin is strongly forked, and the pectoral fins are falcate, being longer than the length of the head. The lateral line has a pronounced and moderately long anterior arch, with the curved section intersecting the straight section below the lobe of the second dorsal fin. The curved section of the lateral line contains 58-64 scales, while the straight section contains none to four scales and 26 to 38 very strong scutes. The chest is devoid of scales with the exception of a small patch of scales in front of the pelvic fins. The upper jaw contains a series of strong outer canines with an inner band of smaller teeth, while the lower jaw contains a single row of conical teeth. The species has 20 to 24 gill rakers in total and 24 vertebrae are present. The eye is covered by a moderately well-developed adipose eyelid, and the posterior extremity of the jaw is vertically under or just past the posterior margin of the pupil. The eye of the giant trevally has a horizontal streak in which ganglionand photoreceptor cell densities are markedly greater than the rest of the eye. This is believed to allow the fish to gain a panoramic view of its surroundings, removing the need to constantly move the eye, which in turn will allow easier of detection of prey or predators in that field of view.

The giant trevally inhabits a very wide range of offshore and inshore marine environments, with the species also known to tolerate the low salinity waters of estuaries and rivers. It is a semipelagic fish known to spend time throughout the water column, but is mostly demersal in nature. The species is most common in shallow coastal waters in a number of environments, including coral and rocky reefs and shorefaces, lagoons, embayments, tidal flats and channels. They commonly move between reef patches, often over large expanses of deeper sand and mud bottoms between the reefs. Older individuals tend to move to deeper seaward reefs, bomboras and drop-offs away from the protection of fringing reefs, often to depths greater than 80 m. Large individuals, however, often return to these shallower waters as they patrol their ranges, often to hunt or reproduce.

Juvenile to subadult giant trevally are known to enter and inhabit estuaries, the upper reaches of rivers and coastal lakes in several locations, including South Africa, Solomon Islands, Philippines, India, Taiwan, Thailand, northern Australia, and Hawaii. In some of these locations, such as Australia, it is a common and relatively abundant inhabitant, while in others, including South Africa and Hawaii, it is much rarer in estuaries. The species has a wide salinity tolerance, as evident from the ranges from which juvenile and subadult fish in South African estuaries have been recorded; 0.5 to 38 parts per thousand (ppt), with other studies also showing tolerance levels of less than 1 ppt. In these estuaries, the giant trevally is known from both highly turbid, dirty water to clean, high visibility waters, but in most cases, the species prefers the turbid waters. Younger fish apparently actively seek out these turbid waters, and when no estuaries are present, they live in the turbid inshore waters of bays and beaches. These young fish eventually move to inshore reefs as they mature, before again moving to deeper outer reefs.

The giant trevally is a solitary fish once it reaches sexual maturity, only schooling for the purposes of reproduction and more rarely for feeding. Juveniles and subadults commonly school, both in marine and estuarine environments. Adult giant trevally are known to range back and forth up to 9 km along a home range, with some evidence of diel and seasonal shifts in habitat use.

The giant trevally is a powerful predatory fish, from the estuaries it inhabits as a juvenile to the outer reefs and atolls it patrols as an adult. Hunting appears to occur at different times of the day in different areas of its range; off South Africa it is most active during the day, especially at dawn and dusk, while off Zanzibar and Hong Kong, it is nocturnal in its habits. The species' diets have been determined in several countries and habitats; their diets generally vary slightly by locations and age. In all but one study (which was of juveniles), the giant trevally dominantly takes other fishes, with various crustaceans, cephalopods and occasionally molluscs making the remainder of the diet.

Where We Caught Giant Trevally In Myanmar So Far...

So far, we have caught them only in Dawei area, Tanintharyi Division, South Myanmar, fishing from the shore, essentially in rocky areas.

They are regularly caught by local anglers offshore from Ngwe Saung (Irrawaddy Division) and Ngapali (South Rakhine State), around islands and rocky reefs. 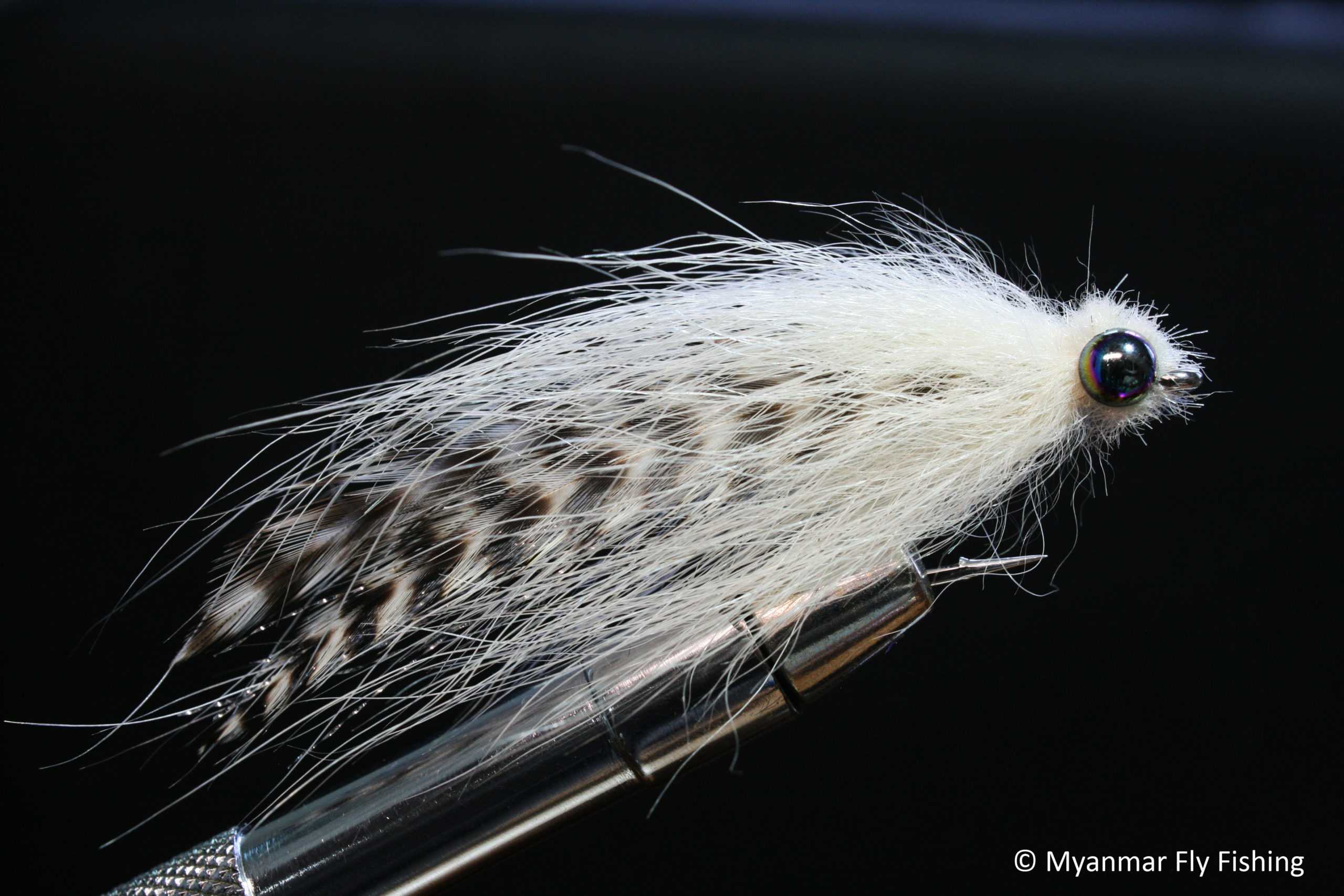 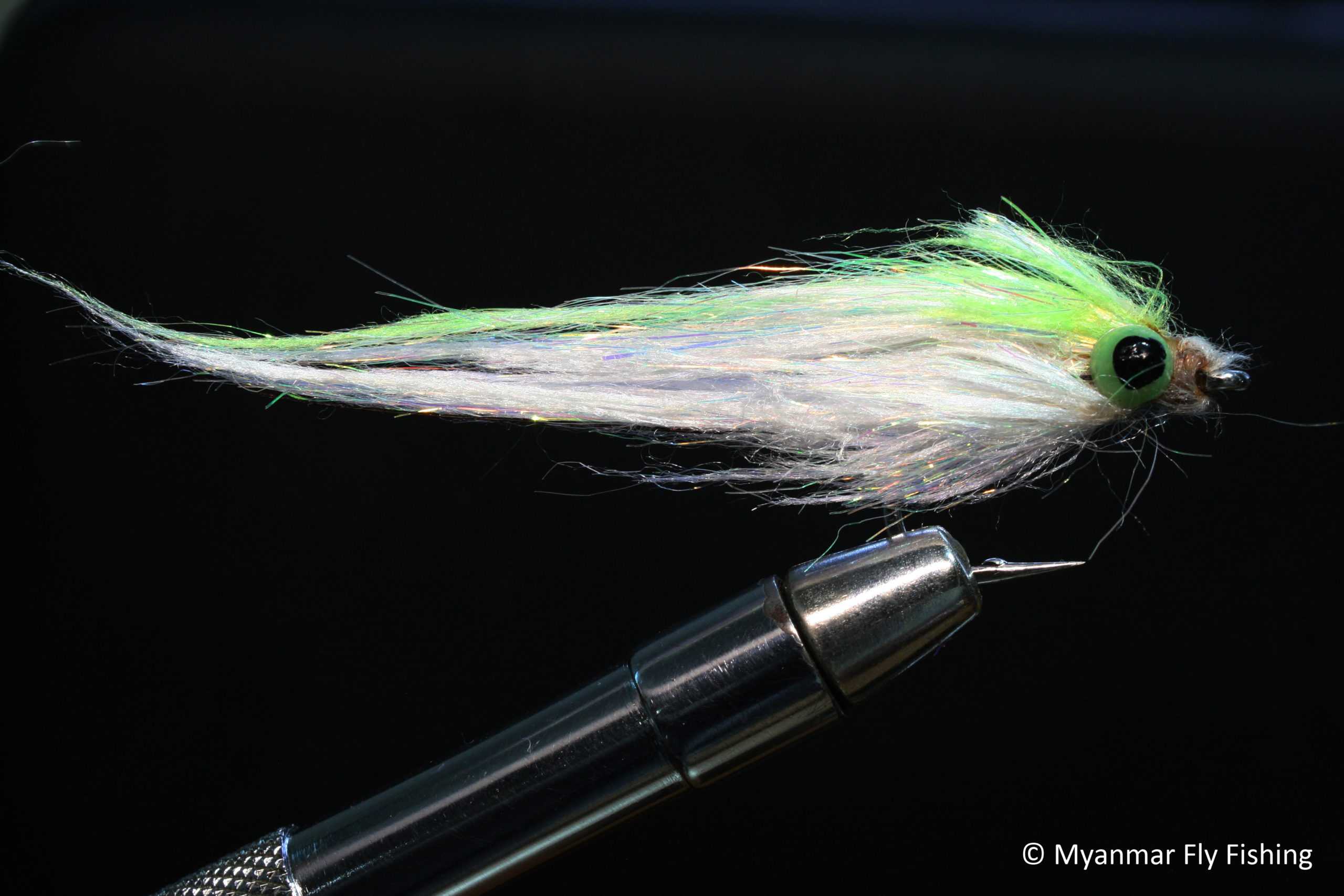 Fly Fishing For Giant Trevally In Myanmar: What We Understand & Know So Far...

So far, we have fished GT on the fly only from the shore; they appear to like rocky shores, where the water is deep and rocks big, providing under-rock caves where they can hide while looking up for preys.

As they are powerful fish, pulling a GT from those rocks while standing on slippery grounds battered by the waves provides a thrilling experience with amazing adrenaline rushes. Considering the conditions, it is not uncommon to lose the fish during the fight, victim to the sharp edges of the oyster covered rocks, deadly to any line...

They take a decent size streamer easily; when they are decided, there is usually no need to strike, providing you keep contact with the line; they give a powerful strike and hook themselves if only you keep the line tight and control strongly the first rush.

They also go up the surface to get a popper, but such flies would only work if the sea is quiet enough.