Having been living in Yangon since 2008, it is only since 2016 that I really started exploring Myanmar with my fly fishing rods. And when you live in Yangon, that question comes naturally...: where do you go fishing on the weekend to get your weekly fly fishing fix? There is no one answer to this. Follow me as I explore possibilities...

There is one place in Yangon called Mya Kyun Thar Park. It is about upper downtown to mid-town, on the eastern bank of Inya Lake, very well known to all Yangoners. 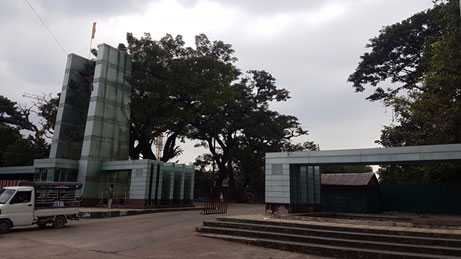 A well-intentioned friend recently asked me if I had tried fly fishing there. Since it is a very reasonable distance from where I live, about 35 minutes’ walk, I found it a fair question, and the place worth a try. After all, if it proved to be quiet and nice enough with a few hungry tilapias or snakehead fishes, it could be the perfect weekend fly fishing fix. I also remembered that I had already been there somewhere around 2011 with my then girlfriend, walking in a quiet and green environment, fairly clean with no-one around.

So on a Sunday afternoon, I resolved myself to give it a try, hungry I was to find my weekend fly fishing fix... Backpack on my back, rod and flies in the bag, my GoPro attached to my backpack's left strap, I started my half an hour hike through Yangon's busy streets, full of determination.

Once there, I only had to go through a gate, guarded by a sleeping man in an old uniform, then among ghost structures of unfinished buildings, finally through restaurants standing on both sides of the concrete path before reaching the area I remembered to be green, clean and quiet. 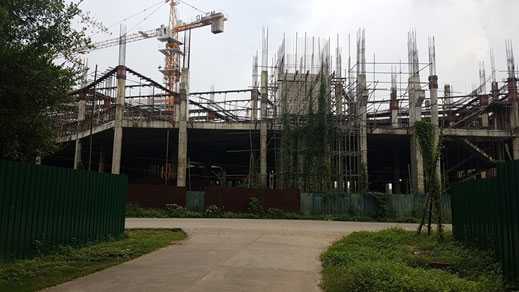 (Ghost structure of an unfinished building…)

Well, that place was no more, except it was, just different from my memories that had forged my determination to come fishing there...

The old tarmac road full of potholes is now a new concrete road. Greeneries are still there, but quietness and loneliness no more...

Cars with black tinted windows, parked in the protecting shade of beautiful centuries-old trees, engine and air-conditioning on, kind of killed the expected feeling of peaceful and quietness I had built on my way.

But it is only when I started looking at the trash on the concrete road and on its side that I understood... And for trash, there is a lot of it. Sure you find the usual and too common plastic bottles, plastic bags, Styrofoam takeaway boxes, empty cans... But what eventually caught my attention was way more singular and explained the cars, well, not the cars themselves, but the black tinted windows and running engines of those parked cars.
Used condoms and their packaging, lying on the concrete, in plain view, not shy, not hiding. 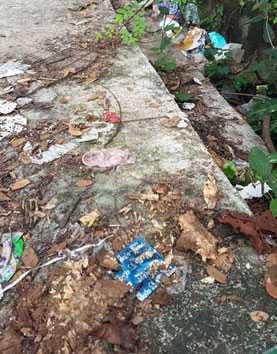 (Garbage littering the road at Mya Kyun Thar Park, including some obvious items…)

I kind of froze and hid my GoPro at the bottom of my backpack in a very quick and nervous move. I had not recorded anything, but I just suddenly felt that displaying a camera in that environment was kind of inappropriate and could lead to a dangerous misunderstanding... After all, I only wanted to go fishing... And the fishing rod, even still folded in the backpack, felt equally inappropriate and out of place.

Yet, I couldn't resolve myself to being beaten so quickly, that way! I kept walking, decided to visit everywhere I could, every corner of the park, just in case a forgotten piece of paradise would be hiding there, behind a tree, some tall grass, or a bunch of bushes, left to grow wild, for the sole purpose of offering me the so much sought after and anticipated refuge from the ugliness I had just realised and that was lying in plain sight. 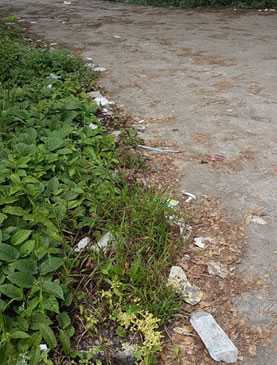 I walked, but I failed. Or was I too demanding of quietness and nature that I could not appreciate what was offered in front of me? Well, maybe it is a question of perspective, but I eventually resigned myself to the idea that this was not it. Yes I am looking for my weekend fly fishing fix, but not at any cost. No I will not be fishing where trash is being thrown of black tinted window cars, just not my thing, really not my thing...

Back home in the evening, that same friend who had asked me if I had tried fishing in Mya Kyun Thar park called me to know how my fishing experience had gone. He knew I was going to try there on that very same day, I had told him, barely hiding my excitement...

Still, when he called me on that same evening, there was still some excitement in my voice. I didn't tell him anything, only that I would write it down for him and others to read...

So here it is my friend, that was my fly fishing experience in Mya Kyun Thar Park.
And just in case you are wondering, I am still looking for my weekend fly fishing fix...

If you haven't heard about acrobatic fly fishing, it is probably normal. Acrobatic is indeed not the usual adjective to describe our favourite fishing technique.

It all started a long time ago in my French Pyrénées; fishing these crystal clear waters for brown trouts, I always felt this feeling, this urge, to go and see behind that rock, behind that cliff, beyond that bend of the river that seemed inaccessible, that was more often than not, inaccessible indeed. I spent lots of time analysing very detailed topographic maps just to find a way to access those inaccessible stretches of rivers.

And surely I did access some of them. Surely too, I found myself in various positions, quite often precarious, climbing up or down rocks and small cliffs, steep slopes, holding my precious rod between my teeth while using all my fingers to hang on anything I could, just to access the inaccessible. 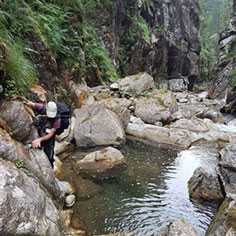 (Holding my precious rod between my teeth while climbing…)

I fell, I slid and, curiously enough, developed the automatic reflex to gently throw away my rod, at the first feeling of an inevitable epic fall. And until now I never broke a rod that way, too precious. And despite playing with the odds, I still feel I never crossed that fine and blurry line of personal safety. My aim is not to flirt with that line, it is just to go fishing, just there, where I just can't, or can. Telling my stories, I started to use that word to describe the access to my fishing spots, "Acrobatic". That's how my acrobatic fly fishing practice got its name.

Now I live in Myanmar; and that urge still urges me... And here in Myanmar, it gets a lot more complicated, a hell lot more. Fishing in Europe is pretty comfortable; you take your car, you drive until the access point, the GPS even helps you if you need, you get off your car, get dressed up in your outfit full of gadgets, then you fish.

Well, here in Myanmar, it is no like that, not at all, not even remotely.

Of course you can find bodies of water accessible by car, but the fishing experience is likely to be a little disappointing. Myanmar is still a country where lots of people in rural areas, but even in Yangon too, forage for food. Fishing is still very rarely a pastime, and among recreational fishermen, catch and release is a foreign concept, not practiced. In a place where a fish caught is a fish about to be killed, about to become food, more often than not for survival, the only way to find fishing grounds really worth is in remote inaccessible areas.

At least, that is what I think. It is possible though that this is an excuse, my excuse to explain my attraction to the inaccessible...

Myanmar emerging from a complicated and turbulent recent history, lacking basic infrastructures like roads and where conflict prevailed in most parts and still does in some, inaccessible fishing grounds are plentiful.

Where I was spending lots of time on detailed topographic maps back in France, here in Myanmar I spend this time on satellite imagery, looking for rivers and stretches of coastline that look inaccessible. Then I book a flight, then a motorbike, then I drive, trying to narrow in onto my objective, using those clues seen on satellite images.

If there are signs of human activity, like a patch of vegetation that seem to be different from its natural surroundings, then there must be a path leading there.

And from there, I walk in the bushes, in the jungle, through swamps and mangroves, on slippery rocks, on gorgeous remote beaches, in narrow canyons, until I find that body of water that appealed to my feeling, to that urge to reach that place, that one place only because it looked inaccessible. 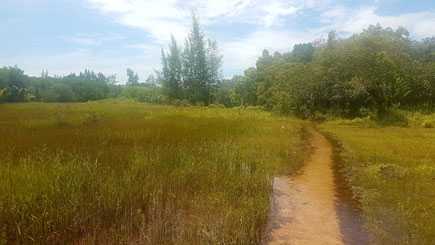 Sometime it is indeed inaccessible, but sometimes it is not. I fall, I slide, I bruise my body, but I keep going, I keep trying, my mind holding on that dream, responding to that urge to get there, my body holding onto anything it can, my teeth clamping into the cork that makes the handle of my precious rod. And I keep going. And what is inaccessible today might not be tomorrow. I don't fail, more honestly I don't admit I fail even if I do, I only claim my equipment is not good enough for today. So I'll come back tomorrow, or the day after... And I'll get there... I surely will.

In the end, it is possible that fishing might be as good or even possibly better in easier to reach places as in inaccessible ones. But it surely won't taste as good as it does when you fish beyond the inaccessible. 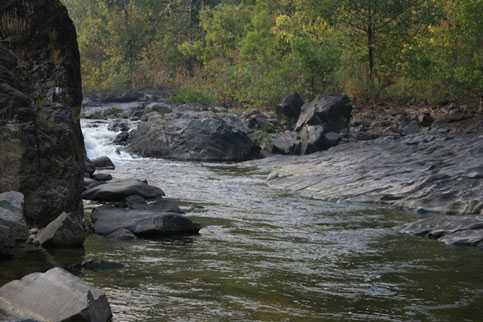 And I will keep doing it until I cannot anymore, even if people call me crazy, just because I love it, that's all. No excuse, no justification, I just love it.

So if you are looking for me, I might just be there, somewhere inaccessible, in some precarious acrobatic position, doing some acrobatic fly fishing...